History of Wheaton and Kensington 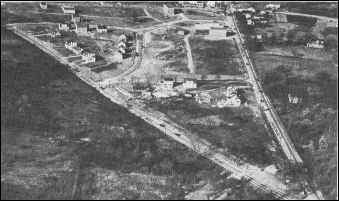 Wheaton, Maryland was named for Major General Frank Wheaton, one of the few generals of the Civil War who attained this rank in the Union Army without attending West Point. In 1864, General Wheaton commanded the defense of Washington from Ft. Stevens against Confederate General Jubal Early’s attack in early July. The fort, still standing, was not far down Georgia Avenue (then called the 7th Street Pike) from the then thinly settled countryside that only five years later was to take the General’s name.

Early Wheaton area families were the Cissells, Hardys, Stubbs, Hickersons, Godfreys, Bowies, Eustices, Dwyers, Pendletons, Wellers, Magruders, Ecclestons, and Plyers. Some of these didn’t settle in Wheaton until after the Civil War.

George F. Plyer became Postmaster on October 5, 1869. He set up the office in his home at Georgia Ave. and Plyers Mill Rd. where Hughes Methodist Church now stands. Some accounts say that Plyer named the community for General Wheaton while others say that Charles A. Eccleston chose the name. Wheaton bore its name from that time except for the a period in the mid-1870’s when it was known as Leesborough. On April 30, 1906, the Wheaton Post Office was discontinued and mail was sent to Sandy Spring, a much more populous area at the time, for distribution. There was also a Plyer Post Office at one time, near Wheaton, and both Plyer and his wife served as Postmaster. The Post Office was located at several other locations before being moved to its current location on Amherst Avenue in 1958.

The Wheaton business community began at the current site of the Wheaton Shopping Center on Georgia Ave. at University Blvd. where a hotel-tavern owned by Richard T. Mitchell was located in the Civil War period. This tavern was later taken over by a member of the Cissell family who erected a new store at the same location.

In 1922 a gas station with an apartment above it was built on the northwest corner of the intersection by a Dr. Atkinson of Washington. In 1928, Dr. Atkinson built a few stores on the property where the Anchor Inn stands today. In the 1930’s a baseball diamond was located where the Exxon station now stands at the same intersection. Other restaurants and stores were built in the area over the next two decades. The building that today houses Elbe’s today was an office building in the 1940’s.

On November 1, 1952, the “new” Georgia Avenue was opened by Governor Theodore R. McKeldin. By 1958 there were more than 400 businesses and professionals located in Wheaton. This number has grown exponentially since that time. The Wheaton Plaza Regional Shopping Center was the sixth largest in the nation at the time of its construction and is currently under major redevelopment as Westfield Wheaton. The Triangle Lane area has become a major area of commerce and retail business, and is developing into the focal point of the Central Business District as the Wheaton Marketplace.

By the late 17th century, land speculation in Maryland had reached the Rock Creek basin, which was still an uncleared frontier. Within a few years, the huge land grants had been broken up into settled farms, growing Maryland’s staple crop of tobacco, which was inspected, marketed, and shipped, first from Bladensburg and later, in the 18th century, from the seaport of Georgetown. The area changed very little, except for the slow diversification of crops, until 1873, when the Metropolitan Branch of the B&O Railroad cut through Montgomery County on its way to Point of Rocks.

A community developed where the railroad tracks crossed the road, which connected the Rockville Pike with Bladensburg. It has retained its identity through all the various changes of the ensuing years.

This early railroad settlement, known as Knowles Station, catered to the neighboring farmers. It consisted of scattered homes and services, with a railroad stop and post office. In the early 1890’s, a real estate promoter, B.H. Warner, developed a planned community of streets and building lots, complete with church, library, and local newspaper. This model town was renamed Kensington and incorporated in 1894 with a mayor and council form of government which is retained today.

The Town of Kensington